All God's Creatures Great and Small 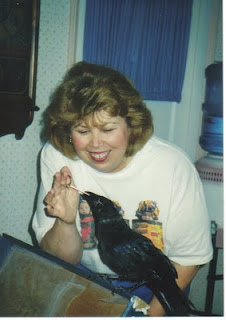 This is Seemore. We rescued him in 1997. He had fallen out of his nest into our front yard. The poor little thing didn't have any feathers and had a hole in his abdomen about the size of a quarter. There was only a thin membrane holding in his intestines. We took him to the vet and we were assured with proper care that he would survive and the hole would eventually heal over and feathers would cover his tummy.

He had to be hand fed every four hours. It was so cute. When ever he'd see me he'd flap his little arms and open his mouth wide for me to put the food in. Had to stick my finger way down his throat. As you can see in the above photo, he developed feathers and grew into a big beautiful bird. In this photo, he is still very much a baby. He grew to be twice that size. We called him Seemore Poops-a-lot for obvious reasons. (lol!)

He lived in our kitchen. Loved to be on the floor. Peeled the wallpaper off the walls, but, I didn't care. I loved that bird. I built a lovely big cage for him, but, he was only closed up in it at night.

We had two kitties and a dog at the time and one time our little dog was in the kitchen and Seemore nipped at the fur on her back legs and I thought we had a dead crow on our hands. But, alas! No one was hurt. The kitties were terrified of him.

We wanted to keep him, but, could no longer do so in the house. I phoned a wildlife rescue to find out the best proceedure to release him and they told me he couldn't just be let go because he didn't know how to be a wild crow. He would have to be rehabilitated.

It broke my heart. I wanted him to live in our back yard. How I cried the day we took him to the wild life rescue. They placed him in a huge aviary (about 60 feet square with an adult raven. They told us that Seemore would mimick the raven and hopefully eventually be rehabilitated. I was in tears when we left that place. I was not allowed to even visit him because he had bonded with me and I would inhibit his rehabilitation.

I had all I could do to not call every day to see how he was doing. Finally after 2 weeks, I could no longer stand it. I phoned and was told that he was doing great and would soon be released, but, not until they were sure he would survive on his own.

It's been 13 years ago now. I still remember how sweet and cuddley he was. So affectionate. And smart! If we had not had our dog and kitties, he would still be with us today. Whenever I see crows, I think about my little Seemore and wonder where and how he is. They can live a very long time. I hope he is well.
Posted by button at 5:53 PM 6 comments: 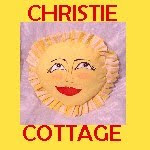